History of the Place

2 years ago, Dave St.Germain bought this land in the woods of Barre, Massachusetts, hoping to rediscover what it means to be "at home." The true history of the place, of course, goes back a long way... 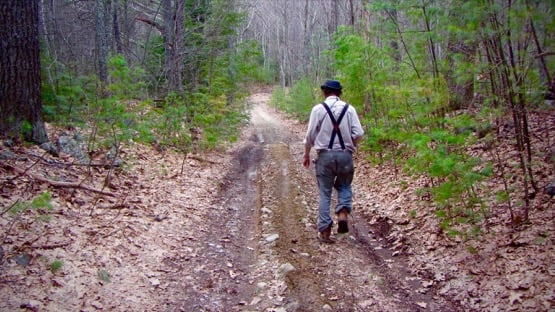 20,000 years ago, the Laurentide ice sheet extended from the Arctic, through New England, and into Pennsylvania. As it grew, the glacier scoured all vegetation and soil off the ground and crushed the bedrock into boulders. Roughly four hundred feet of dirty grey ice covered this region for thousands of years.

12,000 years ago, at the end of the last ice age, the glacier retreated north. Meltwater carved out streams and lakes, and granite boulders scattered across the land.

The first natives made their way across the continent, foraging in the glacial morraine tundra of prehistoric Massachusetts.

6,000 years ago, the Native Americans who came to be called Nipmuc ("fresh water people") thrived in this area. They cultivated land in the fertile watersheds of southern Massachusetts but migrated to the rocky north for seasonal hunting and fishing.

The dirt road leading to Bodhi Crumb would have started as a very narrow trail through dense wilderness, snaking from the Nipmuc sacred Mount Wachusett fifteen miles away and passing through the nearest settlement, called Nichewaug, two miles down this road.

350 years ago, English colonists arrived in Massachusetts and proceeded to decimate the Nipmuc population through the introduction of new diseases and a concerted effort to convert or destroy the existing residents of the New World. Many Nipmuc were forced to live in "praying towns" established by colonists for religious conversion, but the Nipmuc in this region were too remote to be subdued.

In 1675, during King Philip's War, the Nipmuc kidnapped a prominent English woman in Lancaster and transported her through the wilderness, perhaps even traveling down this same path on the way to the Connecticut River. After receiving a ransom of twenty pounds, they let her go, and she wrote a book about her adventure. The Nipmuc, however, were crushed, forced to flee to Canada or to stay and later sell what remained of their homeland. Today, their descendants are still fighting to maintain the last sliver of their tribal land, a mere ten acres in southern Massachusetts.

In 1733, a region was awarded to some of the English soldiers of the Indian Wars; this became the town of Petersham, a stone's throw from Bodhi Crumb. Over time, colonists would begin to deplete the vast forests of New England. One family could burn up to thirty-five cords of wood per year, and the huge, old growth pines were quickly harvested as ship masts for Great Britain's imperial war machine.

Around this time, the ancient foot trail from Wachusett Mountain was widened into a road in order to transport more goods and people through the colony.

200 years ago, Americans clear-cut much of New England, transforming the land into rolling hills of pasture, mainly for sheep.

Several families lived and farmed along this road, which was the stagecoach route between Worcester and Brattleboro, Vermont. The Sherman family lived in the large house about half a mile away from here. The path cutting through the Bodhi Crumb property is the only trail to Devil's Den, a rocky outcropping on Sherman Hill and former attraction for curious children.

James Patterson, from Nova Scotia, later acquired the Sherman land and surrounding pastures. It passed through his family, being farmed and then neglected for a century, until the last of the Patterson land was sold three years ago.

80 years ago, a powerful hurricane knocked over some of the last surviving American Chestnut trees that once dominated New England's hardwood forests. You can spot their remains on the forest floor: slowly rotting trunks covered with moss, facing east to west.

Much of the property surrounding Bodhi Crumb has been placed into conservation, ensuring that it will eventually return to a healthy forest.

This land has been untouched for at least fifty years, a miniscule amount of time for the ecosystem to regenerate — but it's a start. The pasture has returned to a mixture of hardwood and softwood; the huge, scraggly pine trunks and decaying birches are indicators of second-growth forest. Stone walls that once corraled sheep and cattle now just meander through the woods, growing moss and providing shelter for chipmunks. Deer, moose, black bears, foxes, coyotes, bobcats, porcupines, turkeys, songbirds, and many smaller creatures live and migrate throughout the area.

For two hundred years, humans worked hard to destroy their habitat in the name of unlimited growth and the mistaken belief that man can dominate nature. Only in the last fifty years has there been an effort to reverse the damage we've done to this place and allow nature to recreate.

2 years ago and we're back where we started: Dave St.Germain purchased seven acres of this glacial morraine — once a part of Nipmuc territory and now the base of Sherman Hill — intending to relearn a way of life that respects the earth and invites others to partcipate in responsible stewardship.

All of this (and so much more) is the history of Bodhi Crumb.